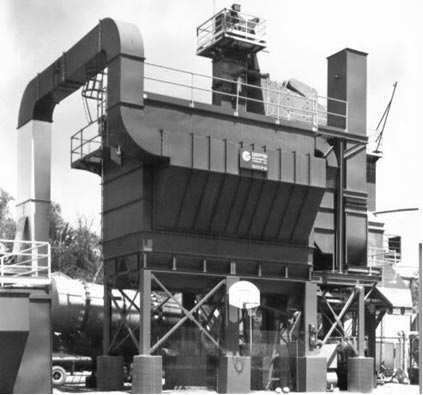 This baghouse, or industrial-sized dust collector, was installed at an asphalt plant to increase production capacity by 33%.

The asphalt producer had an undersized system and could not produce at the capacity needed in a reasonable time.  Trucks waited up to 2-1/2 hours for each new batch of asphalt.  The problem was particularly urgent since the business had grown substantially.

It was determined that the current system could be retrofitted with a Pulse Jet Baghouse.  This type of baghouse uses a pulse, or momentary burst of compressed air, to clean the bags instead of a plenum pulse.  They were able to use the existing hopper, support legs and ductwork.  The number and length of bags were increased to bring the air flow from 28,000 ACFM to 37,000 ACFM.  In upgrading the production line, the owner also installed new screens.

Since starting up the new baghouse, the asphalt producer achieved a 33% increase in production which allowed them to accomplish in 8 hours what had taken 10 hours!  Other advantages include:

Next post: Multi-Stream Recycling System that Processes 10-12 Tons Per Hour